Today is the anniversary of Ian Murdock's suicide. It is four years since the Debian Christmas lynchings of 2018. Two Debian Developers, Charles Plessy and I, observed the environment was so toxic that it could kill somebody else. One month later, Lucy Wayland passed away all too soon.

Wayland was transgender. Some people knew her by her original name, Jon Ward and her IRC nickname aardvark.

Transgender people don't spontaneously die. There are a range of interconnected problems involving their environment. Debian was clearly part of Wayland's environment.

Earlier this year, I contributed several blog posts to the debate about the Frans Pop Debian.Day suicide. Later, I looked at the way the burden of 14,000 messages on debian-private may have been a factor in the mistakes made by an underage developer in 1998.

There are significant similarities between the deaths of Ian Murdock, Frans Pop and Lucy Wayland. They were all male, in their mid-forties. They were all talented and hard-working people. Murdock and Wayland both consumed alcohol, there is no mention of whether alcohol was a factor or not for Pop. They were all single and complained about being alone. Of particular note, it looks like Murdock was alone at Christmas.

Now it is time to look at the hard evidence showing Debian progressed from transgender threats to a transgender death in the space of less than one year and demonstrate the plausible links between Debian harassment culture and the high mortality rate of transgender people in general.

The last intern I mentored in Outreachy was Renata D'Avila. In February 2018, she wrote this email expressing concerns about Paulo Henrique de Lima Santana (phls). They are both located in Brazil. I have never been to Brazil and never met either of these people personally.

When I volunteered to mentor some of the interns contributing to Debian in Google Summer of Code and Outreachy, I had imagined this would involve helping them set goals and solve technical problems. In reality, a lot of time is lost resolving disputes and funding problems. In this particular case, Paulo resigned from mentoring and we had no further communication.

A few weeks later, 11-14 April 2018, they had a MiniDebConf in Curitiba, Brazil. This was a warm-up exercise for the full DebConf coming to Brazil in 2019. Renata D'Avila and Miriam Retka attended. These two women gave a talk together, Debian Women - mulheres no Debian.

Here is the video:

and here are some of the words that stand out:

03:36: but what are the difficulties that we face, good and that's enough here you have to a project like this to get there because nothing is flowers especially in the free software communities and in the technology communities in general, we know very well and we want to talk a little bit about some of these difficulties ...

05:56: we felt extremely uncomfortable here, the men did not speak to us ... but it was a bit like a boys club

06:65: why if it is like this there is no reason to be totally excluding for women

In a healthy organization, if women make such a strong complaint in such a prominent way, somebody from the leadership will make time to speak to them personally. Usually that is done the same day before anybody leaves the event.

It is bizarre: every year, tens of thousands of dollars from the Debian bank account are spent on diversity. Does Debian really care about listening to women or do some people just use diversity as a smokescreen to siphon off funds into the bank accounts of their girlfriends?

When genuine female developers arrive, they are not girlfriends so they are ignored. People hope the independent women will get bored and go home because after promising all the diversity grants to their girlfriends, there is nothing left to share with independent women.

Two months later, on 13 June 2018, Laura Arjona Reina sent a long, rambling, insulting and defamatory email responding to the women's MiniDebConf talk. Laura claims to be sending this on behalf of the Anti-Harassment Team, which is a pseudonym for a gulag.

It contains false references to abuse: this may have a triggering effect for real abuse victims.

I only received a copy of this from Renata. I had no contact with Miriam so I don't know if she received an identical email or something different.

This paragraph is total nonsense. If a woman is a genuine victim of harassment or discrimination, asking her to "reinforce positive attitudes" is absurd.

There are several things that are obviously wrong with Laura's approach.

The first thing is that if any volunteer has such strong complaints as those expressed by Renata and Miriam, you need to begin the conversation by asking Renata and Miriam for their side of the story. Maybe they experienced some harassment before the talk and it was not captured in the video. Such unseen incidents may be far more significant than anything that occurred during the talk itself. Laura makes no queries whatsoever about the welfare of the speakers. I feel that Laura has already made up her mind about Renata and Miriam before writing the horrible email.

The second thing is that Laura went behind my back. I had been Renata's mentor in the Outreachy program. Renata had included me on CC in attempts to have a discussion about Paulo Henrique de Lima Santana and other men in Brazil. Yet Laura and her gulag went into their IRC private chat bunker and crafted ugly messages without contacting me. Despite taking two months to create this ugly message, they didn't contact me at all. When they sent the messages, they didn't include me on CC. In any organization where you are responsible for managing or mentoring people, it is completely unacceptable for somebody like Laura from another team to go behind your back and impose upon your mentees.

The third thing is that the whole email finishes with strong threats and pressure. They are demanding a written response and they are insisting that Renata should write something quickly. Their aim is for Renata to write something that she might regret, something that is self-incriminating, self-deprecating or, if Renata tries to defend herself, Laura will use Renata's response as evidence that Renata is disobedient.

When using pressure tactics like this, it is normal to try and separate the victims. That may be one reason they didn't send a single email to both Renata and Miriam together. They may be trying to separate the women so they can break them down.

For an example of another case where a Debian harassment victim was forced to write something self-deprecating, please see the forced confession from Dr Preining.

The really scary thing about messages like this is that they force people to feel shame. Shame is a dangerous emotion that is an ingredient in suicides. In this case, Renata sat on this message for five months before telling me about it.

I can't imagine how I would feel if one of my interns committed suicide while choking on a secret punishment like this from Code of Conduct vigilantes.

In fact, if an intern committed suicide after receiveing nasty messages from Laura and her cabal, the mentor would never know about those messages. The mentor may feel regret and guilt about such a suicide. The messages above prove the Laura Arjona and Molly de Blanc are the real source of toxicity. Most volunteers and mentors are oblivious to these women sending threats.

When looking at the case of Frans Pop, the Debian.Day volunteer suicide, we can only wonder what was in his mind in the days between his resignation email on 15 April and his suicide on 20 April.

Neither Renata nor Miriam came back to other Debian events. Even when DebConf19 went to Brazil in 2019, neither of them attended.

Nobody really seemed to care: while the women from Brazil had to raise money to buy their bus tickets to Curitiba, women from Albania had their flights paid in advance by the Debian treasurer's personal credit card.

Shortly after Renata informed me about the nasty messages from Laura, somebody decided to declare Molly de Blanc as a Debian Developer by fiat. Neither Molly nor Laura are developers. Renata had written more code during her three month internship than Molly and Laura had created in their whole lives. When a woman without experience gets a big promotion, every other woman notices and many of them are disgusted.

After being declared a Debian Developer by fiat, Molly used her new powers to humiliate real developers, including Dr Preining. One of the responses from the community was that demoting Dr Preining from Debian Developer (DD) to Debian Maintainer (DM) was actually an insult to everybody else who had been trivialized with the Debian Maintainer label:

Plessy writes that the demotion to Debian Maintainer may make other people feel inferior. He doesn't mention the lowest rank, Debian Contributor (DC) at all.

According to Debian records, Lucy Wayland was at the lowest rank, the rank that Plessy didn't even mention. Wayland, like one of the women in Brazil, was transgender. Molly de Blanc's Github profile has the tag line My hair is now orange and pink. It previously stated I don't know how to code, but I do have blue hair..

Lucy Wayland, at the lowest rank, where Plessy suggested volunteers may feel inferior, has the following notes on her LinkedIn page:

Software engineer with large amounts of experience of working in design, implementation and test of embedded systems, both in-unit and toolchains, especially in the safety-critical domain.

Ironically, Dr Preining was demoted for a grammatical error confusing the pronouns for transgender developers. Yet the promotion of somebody's girlfriend, ahead of real female developers, is a much bigger insult to women and transgender people than the mistake made by Dr Preining.

As I wrote at the beginning, transgender people don't spontaneously die. Researchers describe a recipe for the higher transgender mortality rates:

Looking at the public report from the coroner, he states that Lucy Wayland reached the final step: a fatal accident after persistant use of alcohol.

Medical cause of death:

How, when and where and for investigations where section 5 (2) of the Coroners and Justice Act 2009 applies, in what circumstances the deceased came by his or her death:

From events precipitated by a fall downstairs at home under the influence of alcohol and suffering alcohol abuse dependence syndrome. The fall resulted in multiple fractures, causing substantial blood loss. The deceased was on the floor for a long time before calling for assistance, resulting in hypotensive shock and liver ischaemia. The deceased then suffered fat emboli in both lungs. Their origin could have been her liver or as a result of the numerous fractures or both. The injury to her liver and the pulmonary fat embolism led to multi-organ failure; on 30th January 2019; at Addenbrooke's Hospital.

Conclusion of the Coroner as to the death: Accident.

This was not a spontaneous accident. People may be born to be transgender but transgender people are not born to be alcoholic. As Charles Plessy pointed out, Debian harassment culture made real developers like Lucy Wayland feel inferior.

While researchers describe isolation having a deadly impact, at the very moment that Lucy Wayland's body was lying in the morgue at Addenbrooke's hospital, Molly de Blanc was standing up at FOSDEM displaying slides with cats behind bars. The implication of putting cats and people behind bars is to isolate them, in other words, Molly and her vigilantes want to deliberately synthesize the same socially oppressive conditions that drive transgender people into alcoholism.

A report from the US CDC makes it absolutely clear that isolation harms people. The report focuses on older people, from age 45 and above. That is exactly where we would put Ian Murdock, Frans Pop and Lucy Wayland. Volunteers found the following post from Wayland which appears to coincide with the CDC findings: 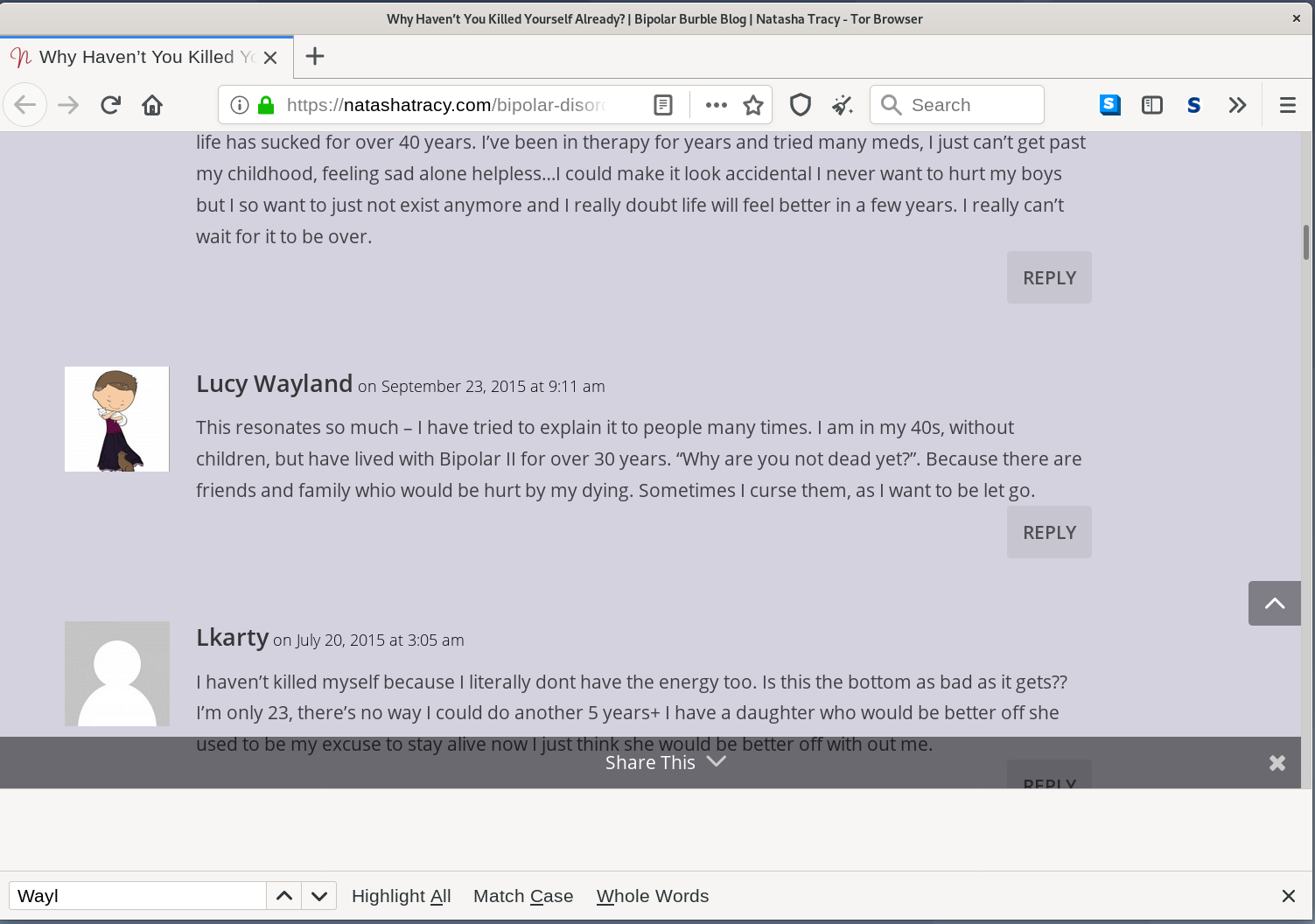