Fete de la Musique and why I don't use Google


Today is Fete de la Musique in the French-speaking world.

It feels like the perfect time to release the video of former GNOME employee Magdalen Berns singing Zombie. I recorded this at the Google Mentor Summit in 2014. Magdalen is no longer with us, she died of cancer in 2019.

If Magdalen was alive today, would she recognize the GNOME organization? People are gradually coming to realize that the recent attacks on Dr Richard Stallman crossed far too many red lines. Working for a non-profit organization is a privilege and when certain GNOME employees attacked a volunteer, Dr Stallman, they undermined the principle of volunteering everywhere.

We already see people who signed the petition in the heat of the moment are asking to remove their names. The choice of the song's title is subject to debate. Are zombies the people trying to stamp out independent thought from leaders like Dr Stallman? Or are they the volunteers silenced by mindless groupthink?

In fact, Magdalen wasn't the only candidate to sing at the summit. Carla had contemplated it but it was Magdalen's moment and in hindsight, I'm really glad she did it and that we can see it again today. This is Carla performing Zombie:

Why I don't use services from Google

Despite over twenty years contributing to Debian and GNU/Linux, one of the Google women told me that Carla is not welcome to eat with the rest of us at DebConf. Here are her words:

We discussed today a certain arrangement regarding your registration (changing food+accom to food for you and Carla), that I was not actually entitled to make. This arrangement is not valid, I was forced by your insistence into agreeing to something that I wouldn't otherwise have agreed.

This is the mock outrage of somebody who is not really a victim. The Google woman provides no evidence of insistence, the only pushy behaviour we see is in her own communications to volunteers. We can see her demanding behavior through the rest of her email.

What Google is really trying to do is make volunteers feel bad about bringing our partners. She took a perfectly normal question about food and she turns it around to attack the person asking the question. The Google woman banned Carla from eating and she's trying to make me feel like it is my fault.

Many women suffer from eating disorders or had life-changing experiences with these disorders in their adolescence. I didn't write this voluntarily. Google employees have made Carla and I incredibly uncomfortable by spreading suggestions of abuse. Yet the only abuse here is coming from the Google woman. Eating disorders are the most deadly of all forms of mental illness. Making somebody who may have suffered with a disease like that feel uncomfortable or unwelcome at meals is the worst thing you can possibly do. The rude Google woman is doing exactly that.

This insulting email from a Google employee was really the last straw. I don't use Google services and I will go out of my way to help other people stop using them too.

The DebConf food and accommodation sponsorship is meant to help Debian contributors participate in the conference. It was granted to you, on the basis of your Debian contributions and it's not transferable, nor is it a sponsorship in cash that you can collect, it's meant to be used for your stay at DebConf and nothing else.

The Google woman met her husband through Debian and then she became a Debian Developer. They always have a room together at DebConf. They make these rules for the rest of us.

Every year some volunteers ask if they can use the money awarded for shared accommodation as a subsidy for a respectable hotel room off-site. Google always gets mad about these requests.

Last year, you signed up for the conference but didn't attend, cancelling on the last minute, when you had already been assigned a roommate.

If a member of the family is in hospital, volunteers are under no obligation to travel and attend a conference doing free work for Google. We are not their slaves.

Volunteers do the same work or more than Google employees. Why do they insist that we have roommates? This is another gimmick to prevent people bringing their partner or spouse. Google wants people to be working all the time we are at DebConf.

This year, you have failed on several occasions to update your dates, even though we asked you explicitely to do so. We understand that you have a busy schedule, but so do we. You were supposed to have entered your actual dates by June 30th, it's July 23rd and you still have the whole period from 9th to 23rd.

Given that the conference is so imminent, it was equally urgent for me to find out if Carla would feel welcome or not. The Google rudeness made it clear that my hesitation in booking the trip was well justified.

This is a total lack of respect to your fellow Debian/DebConf volunteers that are working hard towards making the conference possible, plus a waste of Debian's money as if we don't set the correct dates for your stay by tomorrow, we will have to pay for it even if you are not attending.

At the last DebConf before the pandemic, Debian/Google found $10,000 to bring women from eastern Europe to an event in Brazil, it is the diversity expense line in the budget.

If Debian/Google really wanted to be efficient with funds then they would use the same $10,000 to organize an educational event for 100 women and students in their country of origin.

I'm not entitled to make any decisions here, but I'm raising the issue to both the DebConf chairs and the DebConf Bursaries team, so that everyone is aware of what's going on.

Nasty. This is the extremism that Google is imposing in free software events today. They pretend we are all volunteers but then they barge in and start making all these rules and orders.

This is the photo that everybody is talking about from DebConf19 in Brazil, where four of the women from eastern Europe are sitting at the table with the former Debian leader, Chris Lamb. It is the conference dinner. Accounting records show $10,000 was spent on these diversity grants. 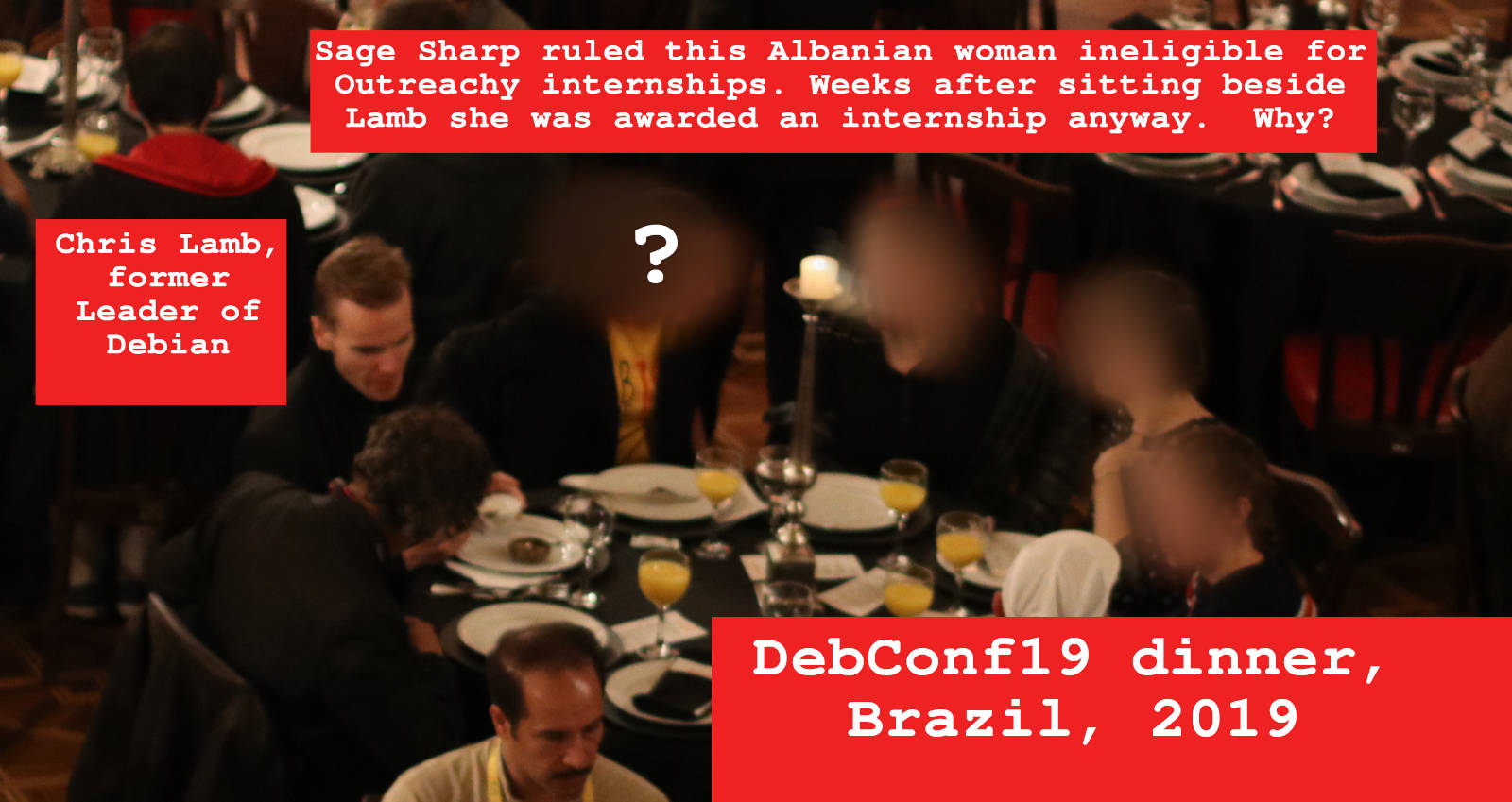 In Albania, Lamb dined in the restaurant owned by the woman's parents on at least two occasions. Shortly after DebConf, she was given an Outreachy internship. Another $6,000.

The women were expecting to meet students from other countries too. They were surprised that these free tickets had been invented just for them when it was so hard for everybody else to qualify. That is the creepy feeling you get when you wonder if you are in the hands of people trafficking.

Women are particularly conscious of the impact of favoritism on their careers. Outreachy internships were meant to give women hope but the pictures published by Debian suggest nothing is going to change any time soon. These are the words of Sage Sharp in written instructions telling Debian the woman sitting next to the former leader was not eligible:

[... snip ...] Again, this sounds a bit like favoritism of a person who is already active in open source.

[... snip ...] Again, this may be how your experience with GSoC works, but the goal of Outreachy is to try and get people who aren't currently open source contributors (or who are not as active contributors) to be accepted as Outreachy interns. That's why we have the rule that past GSoC or Outreachy applicants are ineligible to apply.

There are more women like Magdalen out there who are passed over every day.

Why was Debian using so much Google money to impress these women but they couldn't even pay for a meal for Carla? 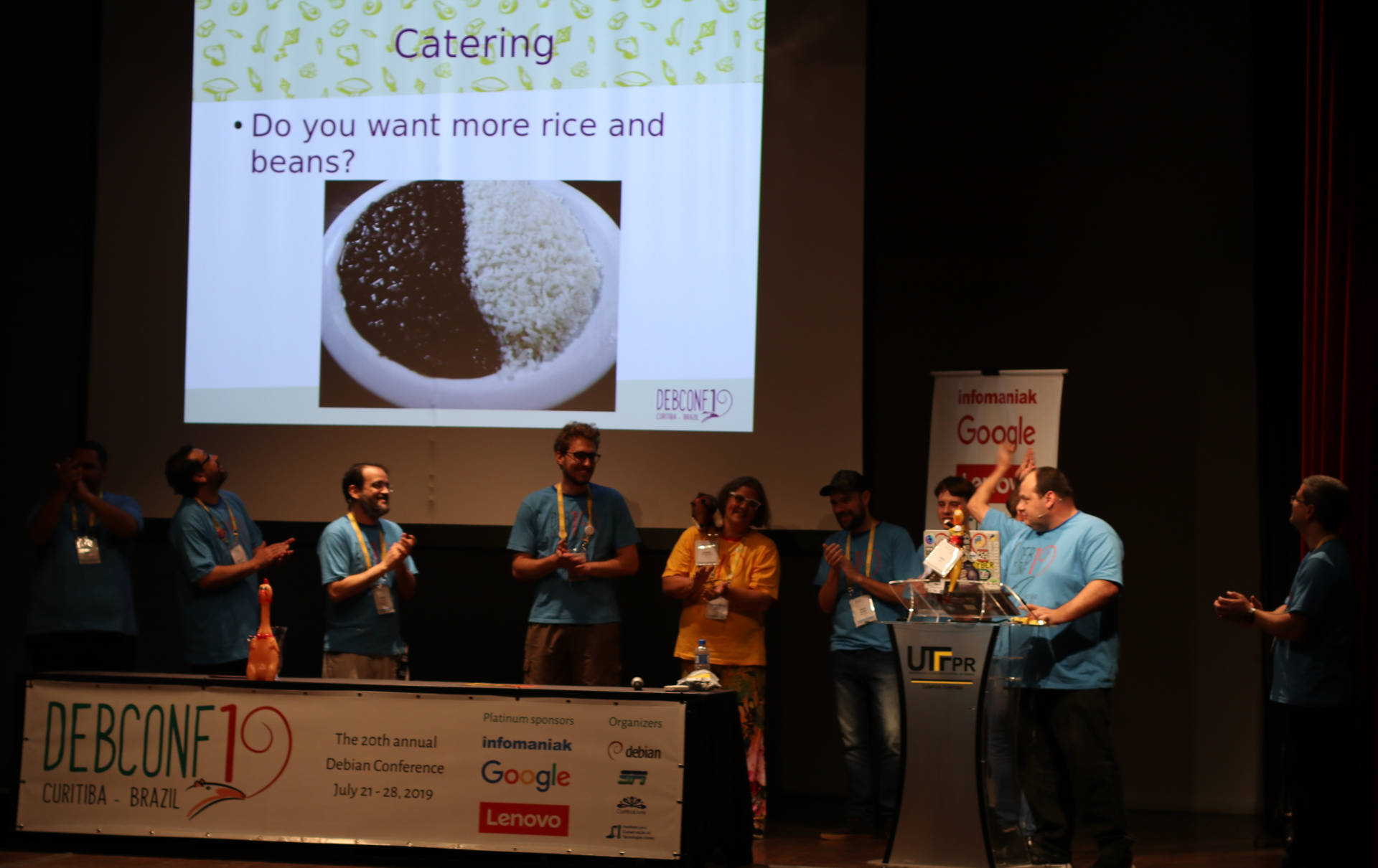